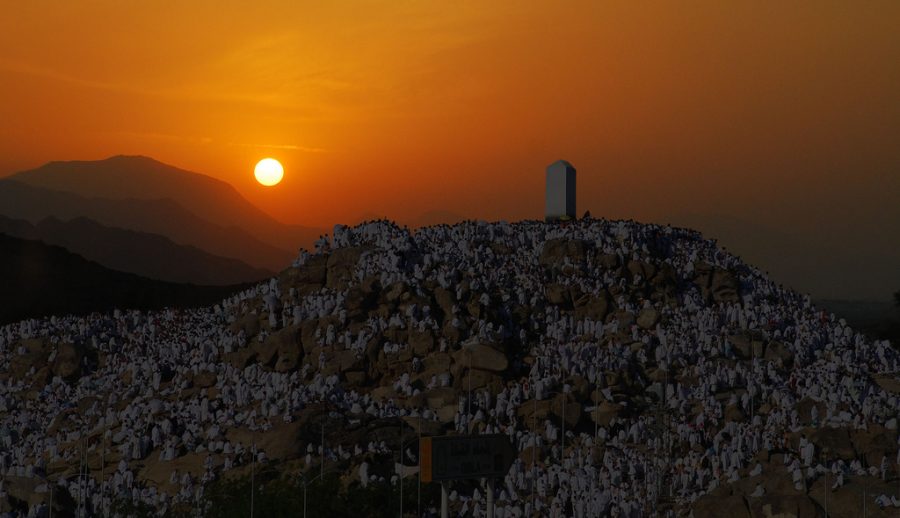 We’re in the greatest days of the year.
The 12th Islamic Month, Dh Al-Ḥijjah, starts on August 11. This is the month in which millions of Muslims embark to perform the Ritual Pilgrimage [Ḥajj]. It is also the month in which we celebrate our 2nd Islamic Festival, ʿEĪd Al-Aḍḥā. It’s a month filled with following the footsteps of the great grand father of our Beloved Messenger ﷺ, Abraham [Ibrāhīm (ع)].
Dates:
Start of Dh Al-Ḥijjah: August 11
9th Day — ʿArafah: August 20
10th Day — [Baqrah] Eid Al-Aḍḥā: August 21

The Messenger of ALLAH ﷺ said: “There are no days in which correct-righteous actions are more beloved to God than these 10 days [first ten of Dh Al-Ḥijjah]. The companions asked: “Not even Jihād for God?” So The Messenger of God ﷺ responded: “Not even Jihād for God; except for someone who goes out with his life and wealth, and returns with neither.” [1, 2, 3, 4]
Fasting on ʿArafah [9th of Dh Al-Ḥijjah] – Thursday, August 31
The Messenger of God ﷺ was asked about fasting on the day of ʿArafah [the 9th day of Dh Al-Ḥijjah — this is under the notion that one is not a pilgrim at ʿArafah]. He ﷺ answered: “It wipes away the sins of the past year, and coming year.” [1, 2] This will be Thursday, August 31.
The Messenger of God ﷺ fasted the first 9 days of Dh Al-Hijjah. [7, 8, 9]
Fasting Qurʾān Charity
Praying Extra Durūd | Ṣalawāt Duʿāʾ
Remembering God Seclusion Helping
Volunteering Repentance Masjid

Ritual Slaughter [Uḍḥiyah] for The Festival of Sacrifice [ʿEĪd Al-Aḍḥā]
It is mandatory [wājib] for for anyone who has ~$3,970 [niṣāb ḥirmān al-zakāh — checked 8/28] in extra possessions [i.e., you don’t need to have this much in liquid cash, but only if your extra possessions — such as an extra car, laptop, phone, watch, etc — reach or exceed this amount]. It must be done on one’s own behalf [not the physical slaughter]. It must be done after you have prayed the Festival Prayer [Ṣalāh Al-ʿEĪd], and before Maghrib on the 12th of Dh Al-Ḥijjah [10, 11, 12]. There are a handful of other rulings associated to this, but if you intend to outsource this act, those people will fulfill the rest of the criteria, God-Willing [in-shāʾ-Allāh].
For anyone intending to do this amazing act, it is religiously recommended [Sunnah] to not trim one’s hair or nails during the first 10 days of Dh Al-Ḥijjah, until your sacrifice has been made. [13, 14]
“Neither the meat or the blood [of your sacrifice] reaches God. Rather, it is your piety and devotion that reaches [God]. …” [Al-Ḥajj 22:37]

The 11th-13th of Dh al-Ḥijjah — Jerky Time [Ayām Al-Tashrīq]
These are the days that were originally used to dry the freshly slaughtered meat, so that it could be preserved [i.e., turned into jerky] for later consumption. #mmmJerky
It is absolutely prohibited [Ḥarām | Makrūh Taḥrīmā] to fast on these days, including the joyous day of ʿEĪd. So do NOT fast from Friday, August 21 [10th] to Monday, August 24 [13th].