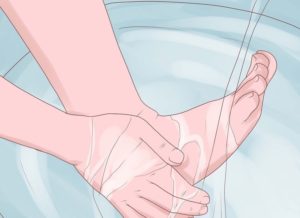 Question: Sometimes it can be difficult to wash my feet when I am performing wuḍū’, especially in the winter or when I’m in a public restroom. Am I allowed to wipe over my socks instead? Can I wipe over my shoes?

Summarized Answer
It is permissible to wipe over your socks, in all circumstances, whether or not it is inconvenient, only if the following conditions are met: you must have worn the socks while you were in a state of wuḍū’, the socks must be thick enough that water does not seep through to your foot as you are wiping, each sock must cover the entire foot including the ankles [some tears or holes are overlooked] and you must wipe over the upper surface of the socks using your hand.

Background of the Issue
It is a mercy from Allah ﷻ that he allowed us an exemption from having to take off our socks every time we perform wuḍū’. It is even more of a mercy that this is allowed to do so even when there is no hardship involved. However, this exception comes with conditions and prerequisites. We have observed many Muslims making major mistakes when it comes to understanding the concession regarding wiping over socks.

Some of the most common mistakes are to wipe the bottom of the sock instead of the upper surface, to wet the hands and just tap the socks with a few fingers, to wipe over socks or shoes which do not cover the ankle, to wipe over shoes and then remove them for prayer and to wear the socks without having performed wuḍū’ prior to that.

These are all major mistakes and render a person’s prayer invalid because the Prophet ﷺ clearly stated, “Prayer is not valid for the one who did not perform wuḍū’.”[1] Wiping over the socks is a substitute for washing one’s feet and must be done correctly, otherwise it would amount to not washing one’s feet properly during wuḍū’. This is why it is very important for every Muslim who wants to avail of this concession to learn the conditions associated with wiping over socks, the same way that they learn to perform wuḍū’ in a proper fashion.

Detailed Answer
Al-Mughīrah (ra) was with the Prophet ﷺ during a journey and tried to help him perform wuḍū’ by taking his leather socks off, but he responded, “Leave them on. I wore them after purifying.” Then he wiped over them.[2] This is just one authentic narration about how the Prophet ﷺtaught his Companions about the exception to the rule. There are so many authentic reports on this subject that Imām Abu Ḥanīfah (r) [d. 150/772] said: “Whoever rejects wiping over leather socks, it is feared that he has disbelieved because the narrations concerning it almost reach the level of massive transmission [tawātur].”[3]

The prophetic teaching of wiping over socks during wuḍū’, rather than taking them off and washing the feet, was specifically performed on leather socks, known as khuff. However, several Companions of the Prophet such as ʿAlī, Ibn Masʿūd, Ibn ʿUmar, Anas, ʿAmmār ibn Yāsir, Bilāl, al-Barā’, Abū Umāmah and Sahl ibn Saʿd (ra) did not restrict this concession only to leather socks but applied it to anything analogous to them as well.[4] This includes socks made from wool or cotton, and even applies to shoes since they serve a similar purpose.

However, most scholars excluded socks which are very thin and semi-transparent, because they are not properly analogous to the types of socks that the Prophet ﷺ wore. The reasoning they gave is that their function is different, so socks which are permissible to wipe over should be thick enough to be able to walk around in, on average terrain. Furthermore, scholars have explained that the socks [or shoes] must cover the entire foot, up to and including the ankle, because that is the region of the feet which needs to be washed when performing wuḍū’ normally. Furthermore, it is clear from the report of al-Mughīrah (ra), and many other reports, that one of the conditions of being allowed to wipe over socks is to wear them after having performed wuḍū’ already. So if someone wakes up from sleep, or just used the toilet, without having their socks on, they cannot put on socks and wipe over them until they have first performed a complete wuḍū’ with washing their feet.